I have tried to calm down on this matter for as long as I could. This was to ensure that my thoughts and my opinion would not be lost among a cacophony of irate swear words and insults. I have really tried but still I feel that in no way is this going to be pretty. If you try to say otherwise of my intended objective, there’s a possibility I will mow you down. Physically or metaphorically.

Today is The International Day for the Elimination of Violence against Women. I am not just writing this piece because of this fact. I am writing because as of last night when I saw the third video of a woman being stripped in these very streets of Nairobi, I could not stomach it anymore. At first there was shame, shame that I had not talked of this sooner. Shame that I, like most naive Kenyans had believed the monsters and the hoodlums would be afraid of the law and not repeat such actions anymore. Shame that I had a belief in a system that has not given me any reason to trust in it. Shame, that I was a current generation man in this our beloved country.

Soon-after though, the anger came, the rage was boiling, my temples were pounding so hard and finally my ears became hot as if a true reflection of the white hot seething wrath that erupted from within the deepest of my element. I was angry and I still am. This last video, was a rape. How long ago was it that somebody compared the first video to a rape?? And now less than a week since #MyDressMyChoice the hooligans were at it in a worse manner. Inserting their fingers and touching a naked, bruised and beaten woman on the street.I am sorry but there are no better words to use and even if I did have them I would not use them. It is no longer the time to share videos that keep humiliating the victims. No, it is time to react, to fight back. If my writing annoys you as much as the videos would have, even better. She had to cower under a vehicle at which point they started yelling for the driver to move the car. These people are a virus. One of the men I noticed had a wedding band on his hand. His shirt was quite unique and I wondered; “Is there a wife somewhere watching this and knowing that that’s the man she chose to spend her life with??”

I am angry. At the person who just stood there recording these clips. At the men who were not part of the crime but just watched as all of it transpired. You will tell me that it is not safe for them to interfere. Did what was happening to the woman look safe to you?? Blows and kicks hurt and yes most are afraid of death. But be a man goddammit!! Stand up for the weak. This should be inherent in your nature. All you need to think of is how that person on the street could be your wife, your sister or your mother. And your fright will certainly change into fight. If you don’t do this, then the clips that will keep circulating will be of the despicable, implacable pieces of feculence winning and creating more fear in the society. They say the journey of a thousand miles begins with one step. We are not even close to overturning this. But we have to try, one by one we have to stand up to these villains. The videos circulating must be of men and women standing up to face these fiends. One video will inspire some other people to do the same. We can use the same medium they have used to create something positive. Here is an example:https://www.facebook.com/video.php?v=511834858916582&set=vb.100002702181334&type=2&theater

I don’t care if anyone stands with me. I shall stand alone. We are not so worse off that the evil people in the society have become more than the good ones. We are certainly running low on the brave. But we need to remember that courage is not the absence of fear but the ability to conquer it. We need to remember as one Desmond Tutu said: “If you are neutral in situations of injustice, you have chosen the side of the oppressor. If an elephant has its foot on the tail of a mouse and you say that you are neutral, the mouse will not appreciate your neutrality.”

You are probably wondering why I am angry at all of you. All of you men. Inclusive of myself. You will talk back and say, you have not been a witness to such and you would have helped if you could. But no dear brother in negligence of duty. You probably have been privy to either of the below: 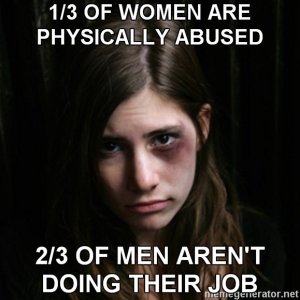 These “cultural”, “innocent”, “disciplinary” actions are what has led to this. The belief that women are here to be controlled by you as a man. That men lead and women follow. That the only way to win an intellectual discussion against a woman is to make use of your stronger physical attributes. These men causing this current mayhem are just fully infected cells of the societal body. You have become a carrier. To heal the body, we will have to start by healing ourselves. We have tried peaceful protests. We tweeted and sent all manner of messages on social media. Now, we have to remember that it is faster to stop a bleeding wound with a hot iron than with bandages upon bandages.

I am calling you and you and you. I am an Alumni of the UoN and time and time again, SONU has been accused of conducting and effecting nonsensical strikes. At this point in time I wonder: How about we stand for something worth fighting for? Our women.

“Everyone has a responsibility to prevent and end violence against women and girls, starting by challenging the culture of discrimination that allows it to continue.”

Cast the seed far and wide:

I am who I am because of what I say with the words that I have, the time I’ve got and the talent I possess. I will myself to do this daily because not everyone can do it. I am blessed to have this ability. I make the shallow look, and sound deep and the deep sound deeper yet with a simple meaning. I want every poem I ever write to be my epitaph. Sometimes I am in my element, sometimes I'm not. There are pieces I don’t believe I wrote because I am not that person anymore. But the truth is; this is a reflection of who I am, who I’ve been and who I will be. I started doing this at age 14 so I guess my works will best be described as “14 going on to immortality”. View all posts by thedivinebandit

7 thoughts on “#RedressForOurWomen “For most of history, Anonymous was a woman.” ― Virginia Woolf”

The mystery is in the history